This is the first facebook ctf. I participated with InfoSecIITR and solved 2 challenges. This post contains the writeups for solved challenges and my ideas about the ones I didn’t solve but could have.

This challenge is written by one of our alumini, @vampire. The source code shows use of PDO which crosses out query based injection. But then I noticed the schema which had a maximum capacity for all the fields and looked at my web exploitation notes which gave me the idea of inserting a duplicate facebook product with my secret. So I used facebook + ' '*56 + hack as name, not_so_secret as secret and hacked!!! as description and the product was successfully inserted. And I could now view the product using facebook and not_so_secret and got the flag. Basically SQL ignored all characters after the length 64 and truncates the whitespaces by default.

This challenge is based on based on a RPC protocol, thrift. The task is to write a thrift client. So I installed thrift and got a thrift client working using the documentation.

I pinged facebook.com and got a pong back Pong(code=0, data='HTTP/1.1 400 Bad Request\r\n'). And if I used pingdebug then I got Internal error processing pingdebug: DO_NOT_USE pingdebug() reserved for local inspections as the challenge file said that you could use the pingdebug method only through localhost. Initially I was trying to find vulns in the thrift protocol itself but no luck. But later I noticed that the ping method setup a TCP connection and send data through that connect so I could smuggle data related to thrift protocol that would invoke the pingdebug method. Now I need to find data to send to 127.0.0.1:9090 to call pingdebug. Instead reading about protocol to get the data, I captured a packet which was calling pingdebug through wireshark. 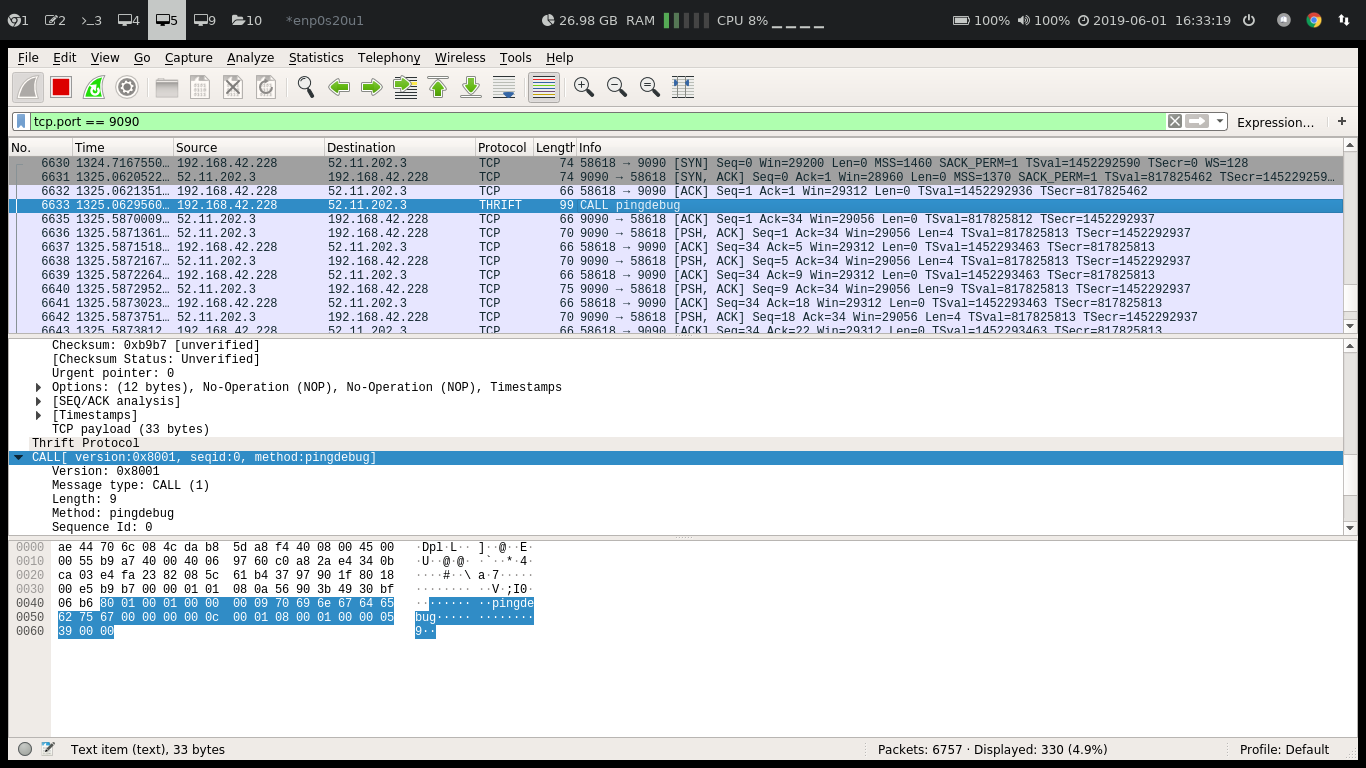 I used the highlighted thrift data and made the pingdebug call and got the flag in response.

I couldn’t solve this challenge during the ctf. We needed to complete some quests to get the flag using osquery which is basically SQLite.

Basically you needed to do 5 tasks:

Now you need to quickly keep the pig alongside the sheep as soon as you access farm for the first time otherwise the sheep would run away and the quest would fail. So I wrote a SQL query for that

This did the job but used 4 farming days and we had to complete all the quests in 5 days. Also I needed to coordinates of emojis while performing a certain task so I needed to access the farm twice to complete every quest which would be 10 days.

Now since the plowing area was a long vertical column so seed planting could be done by brute-forcing the coordinates as only horizontal coordinate needed to be guessed, the other could be set from 1 to E which reduced one access to farm in this quest. Bit still it wouldn’t help to solve the challenge.

After sometime I got an idea of copying the initial farm table to a temporary one and use that to get coordinates of emojis and this worked. As I could do all tasks in 1 farm access plus 1 access of copying so it resulted in 6 days, I needed to cut by 1 days.

Later I used the below query to perform sheep-pig quest but I couldn’t remove the error Invalid move. The src column must contain one value.

I guess the farm used in src was returning a column not a single value.

Later after looking at a writeup I noticed that I missed a simple trick, I could complete seed-planting quest by bruteforcing and also copy the table side by side.

Now I had 4 remaining days, 4 quests and a temporary table to get coordinates so it could have been done.

This post will try to show a small portion of power that sqlmap possess. sequel This is a web challenge from BSides SF CTF 2019. The home page shows a login form. After...

Stay up to date! Get all the latest & greatest posts delivered straight to your inbox